Pick up by our staff and transfer to your hotel.

In the morning, visit to Marrakech, founded by the Almoravids in the 11th century. We highlight: the minaret of the Koutoubia, symbol of the city and authentic jewel of Almohad art, the Saadian Tombs, the Bay Palace, the Medina and the famous Jemaa el Fna Square, where a multitude of vendors, acrobats and Storytellers. Free afternoon.

Breakfast and departure to CASABLANCA, true economic capital of the country. A panoramic view highlighting the neighborhood of Anfa, Park of the Nations, Boulevard de la Corniche, Mosque of Hassan II (optional you can visit its interior). Departure to the imperial city of Rabat and visit of the city: the Royal Palace, the Mausoleum of Mohamed V and the Tower of Hassan among others. Nightlife in Rabat

Departure from Rabat and continuation towards Asilah passing through the fortified city of Asilah city with a very clean medina overlooking the atlantico founded in Phoenician time, free tadre in Asilah. Night in Asilah.

Breakfast and leave for Tanger. Panoramic tour through this city overlooking the sea. We visit the grotto of Hercules, the viewpoints of CapSapartel and a walk in your Kasbah after Departure towardsChaouen or the (blue town), holy city of Islam located in the mountains of the Rif, white houses and doors intense blue.Noche in Chaouen.

Continuation of our trip in Morocco towards Volubilis, population that already figured in the maps of century IV d.C. Visit of the archaeological area. Later, departure towards Meknes, one of the great historical villas of Morocco. This tour was founded by Sultan Moulay Ismail, visiting its walls and the founder ‘s mausoleum, the only religious building to which non – Muslims are allowed. Continue to FEZ.Noche in Fez.

Full day tour to Fez, the oldest of the imperial cities and the capital of the first Arab dynasty of Morocco. The visit includes the Royal Palace, the Medina and the medresas, ancient religious centers, today souks occupied by potters of Fez.

Breakfast and departure to the gentle mountains of the Middle Atlas, a stop in Ifrane called the Swiss of Africa and then we continue towards the national park of Azrou for in the forest of pigs where the mosnos appear and we continue until Midelt for the lunch. Continuing to Erfoud, from this point we will take a trail in 4×4 to go to the Dunes of the Sahara in MERZOUGA. Night in the desert.

After breakfast departure to make an excuse for the desert, visiting the nomads sharing with them a tea with mint, visit the flea market of Rissani, the village of the Gnawas of Khamlia to listen to his muscica esperitual and the afternoon return to the hotel to start The trip in Camels and spend the night in the middle of the dunes of the Sahara Night in camp Berener.

We recommend getting up early to enjoy the sunrise over the dunes. Breakfast and departure to the Todra Gorges. The Todra River, to save the mountains, has built by erosion a narrow gorge with vertical walls more than 300 meters high. Continuation towards the Route of the Kasbahs, name with which it is known to a tour of a series of forts built in adobe with crenellated towers and ornaments of crude brick. Tour to Kella MGouna, famous for its roses and perfumes. Arrival in OUARZAZATE.Noche in Ouarzazate

Breakfast. Visit of the Kasbah of Taourirt. Continuation to the Kasbah of Ait Ben Haddou, World Heritage, departure towards Marrakech crossing the port of Tichka (2260 m alt) with spectacular scenery. Night in Marrakech

After breakfast departure towards Essaouira coastal city passing through the Argan valley arrival in Essaouira, It is full of squares, walls, fortifications and historical monuments. A nice and strange set, a historical and cultural heritage. The three most characteristic features of the city are crafts, culture and traditions. Its cultural heritage is deeply rooted and it turns to the future, a city where everything is mixed and that enchants to all those who visit it.Noch in Essaouira.

After breakfast Visit Your medina is listed as a World Heritage Site since 2001, city of wind and light. Its appearance can bring to mind the image of the “white villages” of Andalusia. It has been attributed nicknames like: “The pearl of the Atlantic”, “Sleeping Beauty” and “The well-guarded.” It is a place of encounter with inner peace, where for centuries there has been a mixture of cultures, civilizations And religions, such as Phoenicians, Romans, Berbers, Carthaginians, Portuguese and French. Night in Essaouira.

Waterfalls Of OzoudFrom Marrakech we leave early in the direction of the cascades of OUZOUD. Before we stop in Iminifri, a natural bridge of great beauty, with fossilization of the roots of the trees. Afterwards we will head towards Ouzoud, enjoy height of 110 meters and are located in the province of Tanaghmeilt, 150 kilometers from Marrakech, in the Cordillera del Atla.The walk through the waterfalls is very beautiful, surround the waterfalls on both sides while you see the vegetation and wildlife Very common to see monkeys) almurzo near the cascadas.Los more intrepid and hot can choose to bathe in the river, is a very clean water although it is quite cold. Dinner and overnight at the Riad

Day 16: Ozoud Waterfalls – Back To Marrakech

We left heading back to Marrakech and stayed the rest of the trip in Marrakech to rest and breathe the last days to remember every day of the trip and ready for the flight for the return. And transfer to the airport in the hour of the flight, tranquillos. End of our services.

Tour in 4×4 vehicle or minibus (with A / C).Driver / guide, fuel.Overnight stays in hotels (breakfast and dinner included).Camel ride and night camp in the desert.

Flights, drinksEverything not mentioned above 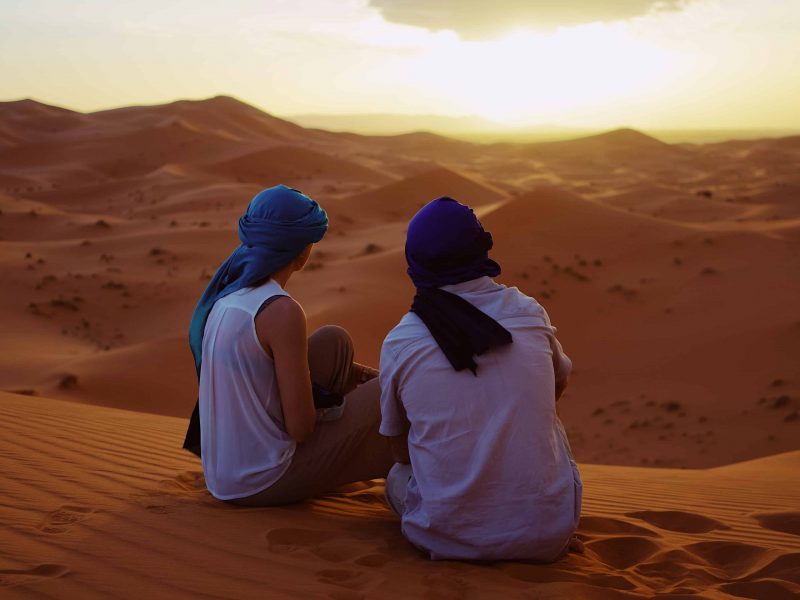